Overview of the Planet

Betazed (also known as Cyndriel) is a Minshara Class planet, one of the larger member worlds part of the United Federation of Planets, and home to the Betazoid race. Betazed is the fifth planet in the Beta Veldonna star system. The Betazoid society had matriarchal elements.

Prior to the 2370's, the ruling body of government was a Democratic Federation, with the Ancient Monarchy having no real power other title only. The title of Titular ruler of the planet belonged to the Fifth House of Betazed, Lwaxana Troi, who also served as Betazed Ambassador to the Federation up until her retirement from the political arena. In the early to mid-2380's, a series of unfortunately incidents swept through Betazed like a flash flood, and it would not be long before matters escalated to a planet-wide civil war. Events came to a head in 2385 when the Democratic Government collapsed, however, before chaos could reign, Kirsta Carter, Reigning as Monarch of the House of Carter, using her vast social popularity and power, used the opportunity to seize control and bring the people of Betazed back to the Ancient Times where the Monarchy ruled. Seeking a change, the people of Betazed seemed to accept this, and the rule of Betazed was returned to the Planetary Monarchy.

Although, the Ancestral Capital of Betazed is the City of Medara, the democracy had the capital moved to the City of Rixx because of it's size and production. However, The House of Carter rectified this matter and moved the capital back to where it was always supposed to be -- Medara.

Scenes of the Planet

The majority of the time, the weather is calm, pleasant, and bordering on tropical. But when the atmospheric conditions shift, they do so with startling speed. Betazed has a blue sky with pink clouds. There is a lot of farmland on Betazed, and cities that are devoted to philosophical studies.

Sites of the Planet

Lake Cataria is a beautiful place on Betazed. Janaran Falls is a waterfall in the Jalara Jungle on Betazed. It is rare for anyone to travel any distance into the Jungle. It has dangers such as mud pits, but there are very few dangerous animals. Bacarba Lake is a lake located on Betazed. The Valley of Song is located on Betazed. The northern cliffs in the Valley of Song is a popular location for scattering the ashes of deceased loved ones. The Loneel Mountains is a Mountain range on Betazed. Loneel Valley is the caldera of an ancient Volcano. It is honeycombed with tunnels and caves. High concentrations of Fistrium in the rock prevented detection by sensors. There was a resistance stronghold in these mountains during the Dominion occupation of Betazed.

Darona is a small colony in the system known for its agricultural, medical and scientific research facilities, and is the sixth planet in the system. Darona is also known for it's highly effective penal colony. Darona has a rose-colored sky and an atmosphere of serenity and natural beauty. Jarkana is Darona's capital city, and the Jarkana spaceport is just outside 'the city'. Jarkana Mountains are near Jarkana. Jarkana is a large village of less than 100 squat square houses, built from adobe made from the indigenous red clay, with broad avenues between them, and extensive gardens filled with exotic flowers surround each residence. There are a few larger governmental and research buildings in the center of the capital. The Teskalia tree is found on Darona. Cavat is grown in fields on Darona. Less than 1,000 Dominion troops were stationed there due to its low population.

History of the Planet

In an early extraterrestrial observation, Betazed was surveyed by the Vulcan Starship Yeht Fai-Tukh, under the direction of the Vulcan High Command in an effort to search for other warp capable species.

In the year 2139, the Avandar was the first Betazoid Starship to successfully break the light-speed barrier. It's crew went on to make first contact with the Terabian race.

Betazoids explored their home star system and maintained relations with several neighboring worlds; however, they had no knowledge of the Human nor the Vulcan species in the years leading up to the founding of the United Federation of Planets, which occurred in the year 2161. Humanities First Starship Enterprise: NX-01 even flew past Betazed's home star system within a few light-years, unaware of the civilization there due to limited sensor technology and the circumstances of their mission. However, its central location made contact imminent, and more comprehensive exploration by the early Federation, ensured that contact was made.

Though they initially feared another conflict like with the Terabian race, the Betazoids eventually saw the benefits in joining, and they became a quiet but visible component of Federation affairs by the 23rd century. However, they had to abolish the religious requirements of their matriarchal government before they could join. This abolishment caused a Religious Dissident Movement to form that would grow in strength for years to come until the great conflict of 2387 is started, which nearly caused Betazed's cessation from the Federation.

Betazed was finally admitted into the Federation in the year 2273, after accepting its invitation for membership. Betazoid involvement soon proved essential to negotiating a number of important agreements of the time, including the Second Khitomer Accords and the Treaty of Algeron in the year 2311.

In the year 2366, Betazed sponsored the Federation's Biennial Trade Agreements.

As of the year 2374, Betazed had a population of 5.6 billion Betazoids, 11 million Humans and 6 million Centaurians.

In the year 2374, during the explosive Dominion War, the Dominion, a powerful race from the Gamma Quadrant launched a successful invasion of Betazed while the Starfleet Tenth Fleet was on routine training maneuvers.

The Dominion used Betazoid slave labor to construct Sentok Nor in orbit of Betazed. Sentok Nor was used as a Jem'Hadar breeding facility during the Dominion occupation. Starbase 19 is only a few hours at warp from Betazed.

Captain David Gold's son, Nathan, was visiting Ambassador Lwaxana Troi just as the Jem'Hadar attacked. Her assistant, Homn, was killed when the Dominion fired on the surface. However, the inhabitants fought back, and eventually rid the world of Dominion forces, but not until after suffering heavy casualties themselves.

As of the year 2377, Betazed had a population of 1.3 billion, drastic reduction from the 5.6 Billion before the beginning of the Dominion War.

From the invasion, throughout the occupation and to the exodus, witness accounts indicate many Betazoids perished during the Dominion invasion and occupation, and that four out of ten telepaths were killed during the final drive to push back the Jem'Hadar. However, this does not seem adequate to explain a more than 75% reduction in population between 2374 and 2377. Either one figure is mistaken, or there was another, unrevealed population exodus we are not aware of.

Geography of the Planet 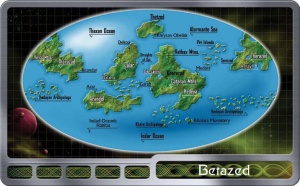 Betazed is a remarkably lush, beautiful world, sometimes described as "the jewel of the outer crown" by traders and other visitors. Its gravity and atmosphere are comparable to Earth, and water covers 78 percent of the planet's surface.

The planet has five continents and hundreds of Islands.

High mountain peaks of multicolored crystal catch the rays of the Betazoid sun, throwing delicate layers of color upon the landscape. The soil possesses crystals of a faceted green mineral called Versina.

The Betazoid sky is blue with pink clouds. Climatic zones range from tropical to arctic, with temperatures averaging 23 degrees Celsius in summer and 13 degrees in winter. The majority of the time, the weather is calm and pleasant in most areas, but when atmospheric conditions shift, they do so with startling speed. Average rainfall in all zones is roughly one and a half times that of Earth, though some seasons are wetter and some drier. No weather-control technology is employed.

There is much farmland on Betazed, and many cities devoted to philosophical studies.

Great expanses of natural wilderness cover much of the planet, varying from dense jungles to wide canyons and cliffs. Much of the major continents are dotted with lakes, and the planet is home to thousands of forms of native wildlife.

Natural History of the Planet