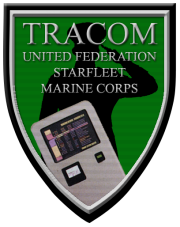 Commanding Officer, Training and Doctrine Command: COTRACOM is appointed by, and serves at the pleasure of, the Commandant of the United Federation Starfleet Marine Corps. The COTRACOM is responsible for establishing the fictional universe for the Corps. Specifically, they are responsible for developing materials and programs for the UFSMC Academy, and for developing the UFSMC’s doctrine (the way in which the UFSMC would intend to conduct operations in the Trek future). TRACOM invents and develops equipment, organization, strategy and tactics to complete the doctrinal picture of the UFSMC universe; then trains the members in it. COTRACOM is the ultimate authority for TRACOM as a Command and serves on the General Staff of the UFSMC.

The COTRACOM is responsible for organization of training missions for both active and training marines.

Retrieved from "https://wiki.ufstarfleet.org/index.php?title=Commanding_Officer,_Training_and_Doctrine_Command&oldid=99844"
Category:
This page was last edited on 28 January 2020, at 14:31.