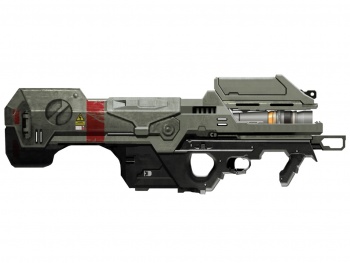 The E-18 is a heavy weapon and requires special training for use.

Designed in the early 2340s and has seen several upgrades.

Fires miniaturized photon torpedoes from an ammo clip. The E-18 dose not use a power cell as photons require anti-matter for explosion, instead has ammunition magazines. The torpedo has its own propulsion system for launch.