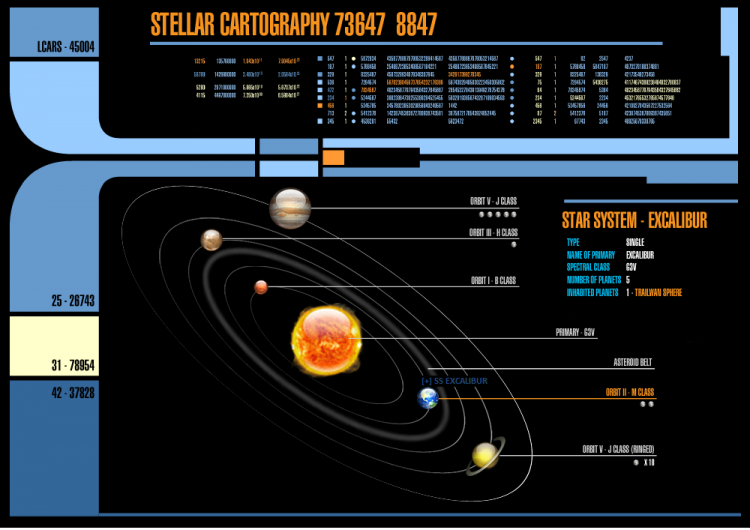 The Excalibur Star System is a star system in the Delta Quadrant containing five planets. In 2383 on stardate 081110, whilst performing studies at the edge of the Pinastri Sector, scientists aboard the USS Yellowstone detected an M-class planet in this uninhabited star system in the adjacent sector. Sensors indicated that its moons were rich in many minerals including the highly prized Dilithium. Even though this system was closer to Borg space, UFS Command saw this as of great strategic value as it would not only provide for much needed ongoing resources to Pinastri, but also provide UFS with a great means of trade. As such it has become the first UFS colony ouside of the Pinastri Star System

The Excalibur System is approximately 13 light years from Pinastri in a trailing direction. Travel time between Pinastri Prime and Trailwan Sphere is three weeks at a cruising speed of Warp 5. The system contains five planets revolving around the G3V Yellow Star Excalibur. The system is some 63,000 light years from Earth.

Retrieved from "https://wiki.ufstarfleet.org/index.php?title=Excalibur_Star_System&oldid=60782"
Categories:
This page was last edited on 26 June 2011, at 13:02.