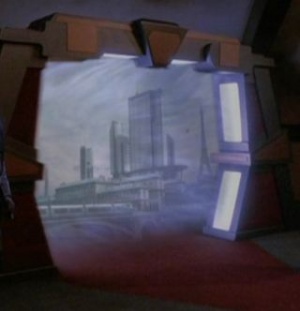 Thousands of years ago, the ancient Iconians managed to develop Gateway technology through the use of the ‘Gem’ which was used to activate the network. The mysterious Iconian Gateway, or Stargate as it is also called, allows instantaneous transport throughout space within the network of gateways extending throughout much of the Galaxy. All that was required for an individual to travel through the gateway was by stepping through the doorway whereupon they emerged on the other side in a matter of seconds.

There were numerous different types of gateways that were constructed by the Iconians which had taken on a number of sizes and shapes. One such model were the Hezlat gateways which were in orbit around planets and were noted as being among the first and largest that were constructed. Each gateway was attuned to one another and the entire network was capable of being shut down through the use of the Master Resonator which served as an emergency shutdown tool.

In 2376, a race called the Petraw tampered with the gateways and activated a number of them across the galaxy as part of a display to other races. Masquerading as the ancient Iconians, they claimed that they were going to sell the technology to the highest bidder which led to the Gateway crisis where ships from different parts of the galaxy crossed into one another leading to a number of disasters.

The crisis was only brought to an end when Captain Picard met the Sentries; watchers of the gateways and the true Iconians. After this encounter, he was informed to find the Master Resonator which was capable of being used to shut down the gateway network which ended the threat posed by it. Since then it has always been thought the gateway network was no longer active.

In March of 2383, UFS scientist Gijsjan Broek discovered a ‘stargate’ on Pinastri Prime. The gateway was different in appearance but nevertheless, was definitely a gateway. During extensive research and back engineering, the dialling mechanism activated the gateway and opened up a network to various locations on the planet and in local space.

In the years since, scientists at the Pathfinder Research Facility have discovered many of these stargates throughout the Pinastri system. Some are clearly Iconian in origin and are still inactive, however some bear the markings of the ancient Rajan civilization, and are very much active.

Initially it was thought that the Rajan stargates operated separately and were not linked to the Iconian network. However one day in early 2385 changed that theory when the Pinastri Prime stargate dialled a random address which turned out to be a planet deep inside the Gamma Quadrant some 75,000 LY away. On Stardate 100215 Colonel Guy Maloy and his expeditionary team stepped out of a gateway on a planet soon to be identified as being Astraios Prime.