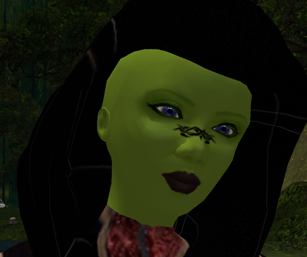 Conditional Notes: They have a green like tint to them almost the same as Orion, however they have markings on their faces which indicate what faction they are from as there are two factions.

History and Other Information

The Melonians have two factions the Sios and the Reptas. They had separated 20 years before the USS Aviator-A arrived in their dimension. The Sios are a peaceful highly educated and reserved faction, they spend most of their time learning and researching. The Reptas are a war like but honorable faction of the Melonians that focus more on war and conflict.

On Stardate 110219 the USS Aviator-A crew was able to assist with negotiations to unite these two separate factions to make one. It was determined that they would have to merge back as both had lower numbers as they could not mate within their own settlements. This was better for both factions to which everything turned out well.

The data and information that the Melonians had on the Federation and or federation builds and technology dealing with temporal or inter-dimensional rifts were removed from their databanks before the USS Aviator-A departure.

The Reptas went a step higher and added another tattoo on the center of the forehead just above the eye line and bridge of the nose, this is with both male and female Repta's Melonians.