Difference between revisions of "UFS Awards"

Reviewed and Amended by:

All awards are issued at the pleasure of the Commander-in-Chief, United Federation Starfleet. Recommendations are made in MSR's monthly by the respective Branch Heads and Station/Ship Commanders, who submit them to the Promotion and Awards Board for consideration. While other members of the Promo/Awards Board have a say, it is ultimately up to the Commander-in-Chief to give awards. Awards are then announced, along with the Promotions. As for annual awards, this is done in a similar setting as the Branch awards. All members of the Promotions Board make their recommendations and submit them to the Commander-in-Chief, who then makes his decisions from there. Awards are then compiled by the Awards director and prepared for release at the Admiral's Banquet. The only exception to the above mentioned case is the dispensation of Awards to the Commander-in-Chief. In this instance the Admiral has no say, and decisions on which awards are earned or deserved are made entirely by those on the Board. This is done in confidence and the Admiral's awards are announced by the Director of Promotions and Awards at the annual Admiral's Banquet.

When displaying your awards on your uniform, there are several things one must pay attention to. Firstly and most importantly it is crucial to realize that some awards are more important than others. This means that while ordering your awards on either your uniform or on a Ribbon Display Rack, one must pay specific attention the order in which you arrange the ribbons.

When arranging your awards, you should always begin with your lowest precedent ribbon (Look below for the order of Award's precedence), placing it on the lower right hand corner of your rack, continue by selecting the next ribbon and placing that to the right of your first ribbon. Continue this until you have four ribbons in one row, once this occurs, move up to the next row, again starting in the right corner and arranging them in order from lowest to highest. Continue until you have placed all your awards in, always putting rows in multiples of 4. If on the top row you have less than 4, be sure to space the awards evenly across the top. If you have multiples of any award, for example 2 Good Conduct awards, use the rules of clustering, adding the device on top of one of the awards. In addition, if you ever have a service award and for example you get another service award, (i.e. going from 1 Year Service Award to 2 Year Service Award) you only need to display the most recent award.

I hope this explains better the concept of arranging your awards. Remember putting your awards in a rack is completely optional. Now I will explain the order of precedence for awards. As a general rule, Annual Awards hold a higher precedence than Branch Awards which hold a higher precedence than Service Awards. Within Annual awards, Lower Honors < Medium Honors < Top Honors < Special Honors. In Branch Awards, all Branches hold equal footing, however when arranging your Awards, it is usually common for you to place the awards given to you from your branch as higher than awards from other branches. The only exception to this rule is that Command Awards are given a higher precedence than any other Branch. Within each Branch, there should be at least one annual award, this holds higher precedence than the monthly awards. Within Branch Awards, other branches awards < your branches awards < Command Branch. Finally service awards, this is generally if you have one the first slot in your award rack, simple as that as you will only ever have one of these displayed at a time.

I hope this better explains the process of Awards and their order of precedence. Ask the Director of Promotions and Awards if you have any questions. Keep up the good work, and keep on Trekking.

Ribbons No Order of Precedence

These Challange Coins are issued direct from a Joint Chief for memebrs that have stood out in some way that woudl not usually be covered by a normal Award.

When a decoration is awarded more than once to a particular crewmember, a second medal is not awarded, instead a cluster is earned.

It should be noted that certain decorations such as citations and major and minor commendations may be awarded many, many times during a career. In that event, a gold cluster can be worn to represent twenty awards. Once a crewmember earns a gold cluster, they will typically refrain from further clustering until twenty more decorations have been earned, taking then another gold cluster. 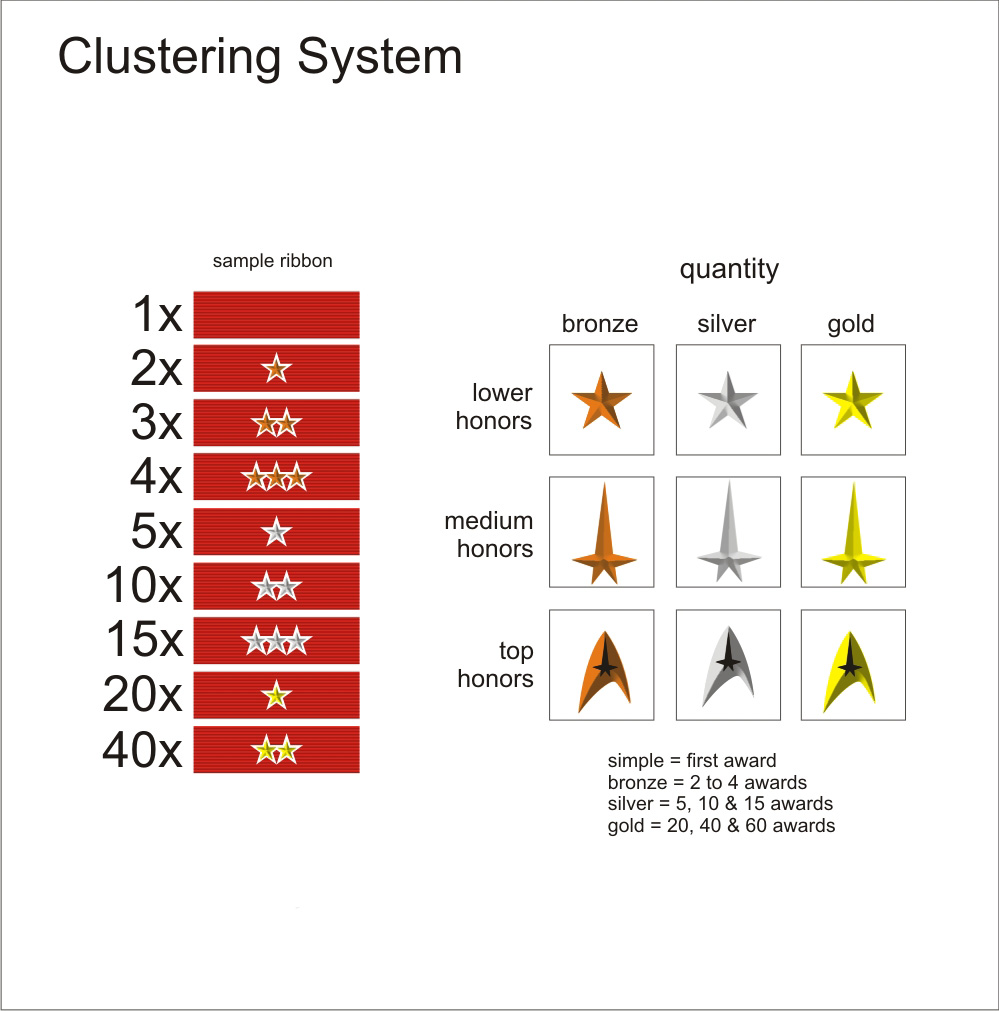 Listed below are the UFS active awards divided by Honors Level as well as Branches they are designed for. Please note the Period the award is entitled to by clicking on the awards name and checking the detailed information.

Of the Year Awards

The following awards are presented to those members who have explored the UFSA Curriculum and taken the specified number of classes. (Please note, with the exception of Branch Practicals & Joint Squadron Missions, each individual class is only counted once in determining the eligibility for the award.)