The USS Aventine having been the first Vesta class ship in 2380 with all its advanced technology was put to the test with the Borg invasion of 2381 which nearly annihilated sentient life in both the Alpha and Beta Quadrants. The U.S.S. Aviator is the eighth Vesta-class starship to be commissioned by the Federation, and the first of the next generation of the class to be developed after the Borg Invasion of 2381.

The USS Aviator NCC 75101-A is the second ship to bare the Aviator name. The name comes from the first Aviator under the command of Admiral Mike Calhoun.

Presently the USS Aviator NCC75101-A is the most advanced ship of the fleet. One of the new systems of the Aviator is its parametallic alloy mixed with the ablative armor. This combination increases the density of the armor which allows a greater absorption rate from enemy fire. The Aviator also is equipped with Quantum Slipstream technology that features Benamite recrystalization. This process prevents the Benamite crystals from deteriorating.

The USS Aviator NCC 75101-A was launched under the command of Cmdr. Markus Tyrellium and executive officer Lt.Cmdr. Generaal Joubert after her a long awaited refit was launched in early October of 2385 and is the only Vesta class ship in the Delta Quadrant.

On stardate 110304 Lt Eddie Hagoromo was promoted to the position of executive officer of the USS Aviator NCC 75101-A. as Lt.Cmdr.Generaal Joubert was reassigned.

Ship Official Song: Faith of the Heart, by Russell Watson (Theme from Enterprise) 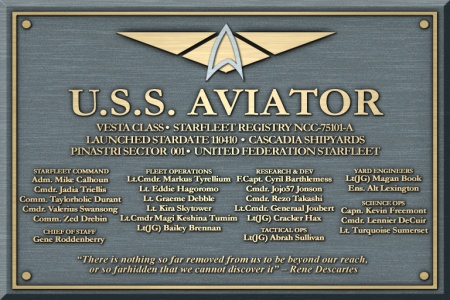 Missions of the USS Aviator-A