Banshee: It is believed the first banshee was the Irish battle goddess, Morrígan, Her role often involves premonitions of a particular warrior's violent death. In Traditional Irish folklore, is a fairy woman keening at the death of important personages, it was believed that the appearance of the banshee could foretell death.

The USS Akira and the Akira Class Starship entered service in 2363, and a rapid production run put nearly a hundred others into the fleet over the next twelve years. Most were assigned to units on the outer Federation territories, performing patrol and presence missions as well as the normal mapping and exploration duties which any Starfleet vessel is expected to handle.

More recently the escalation of tensions at the Federations core over the last few years has led to almost all of the Akiras being recalled to operate nearer to Earth; thirty five where assigned to the Typhon Sector Fleet in 2370, the remainder being assigned to the areas adjacent to the Cardassian, Klingon and Romulan borders. Akira class vessels featured prominently in the 2373 Borg attack on Earth2; the Typhon Fleet, together with several reinforcement squadrons, fought a running battle with the Borg vessel from the Typhon sector to Earth. Many of the ships were destroyed during this battle. A notable participant was the USS Thunderchild, NCC 63549, which participated in the final assault which destroyed the Borg cube.2

The Akiras had been due to cease production in 2373, but with the disastrous contact with the Dominion Starfleet decided to continue production at an increased rate. When the Dominion war began, production of the Akira was boosted to eighteen per year as the Federation converted its economy to a war footing. The Akiras have now become a common sight on the front lines, participating in most of the major battles.

USS Banshee was designed by the Advanced Starship Design Bureau and constructed at Cascadia Shipyards as a Deep Space Explorer/Carrier & Torpedo Cruiser, her first mission was to return to Unimatrix 01 Transwarp hub and determine if there is anythign left of the Borg collective, and if possible retrieve the Federation shuttle left behind by Captain Janeway.

The USS Banshee was Commissioned on Stardate 120229 under the command of Captain Madadh Magic and on Stardate 120501, After the ship collided with a Borg sphere on its first mission, Captain magic fled the ship taking here sister the chief of security Brandi Meredith from sickbay, During their escape Captain Magic disabled several of the ships key systems, and then detonated an EMP device on the flight deck damaging EPS systems across 4 decks. Leaving the ship vulnerable in a dangerous area of space. In the after math of her escape Captain Magic's former Executive Officer Commander Jamie Czavicevic took command of the Banshee, and began repairs, and brought the ship and crew home to the Pinastri Star System. USS Banshee had been given a complete refit and on Stardate 120703 returned to active service under command of Commander Jamie Czavicevic

Flight bay :: The through-deck flight bay spans the entire length of the primary hull on Decks 11 & 12. The Flight bay module has replaced the shuttle bay module that is in previous Classes Star ships. This Flight bay contains support services for the latest in Starfleet shuttle and runabout designs. The Flight bay is controlled by a space/air-traffic control room, known as "Flight Operations". This is located against the Aft wall of the Flight bay, Between the Aft Fighter bay doors, which in turn is supervised by the TIO (Tactical Information Officer) on the bridge. 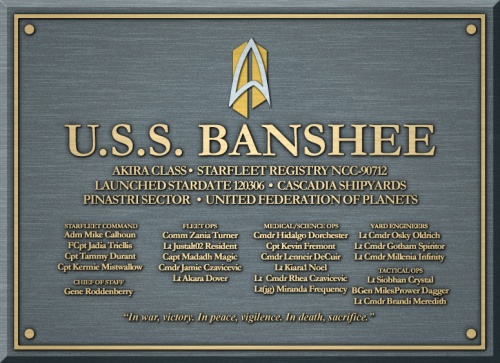