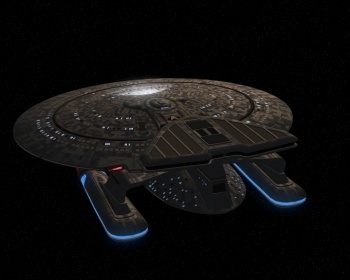 The USS Bonchune was built in 2367, and saw service in the Alpha Quadrant for most of its time active.

She has had two missions of note that involve the Delta Quadrant before her assignment to Pinatri: in 2374 she was assigned to recapture the prototype USS Prometheus from Romulan hands, however she was disabled due to the Multi-Vector Assault Mode that made the Prometheus Class so dangerous to single ships.

In 2378 she was one of the ships that welcomed home the USS Voyager from her long journey: a surprise honor, as the USS Bonchune's Task Force was originally assigned to repel a suspected Borg Incursion.

She was later assigned to the Delta Quadrant as part of the exploration fleet after the construction of the Pinastri Colony.