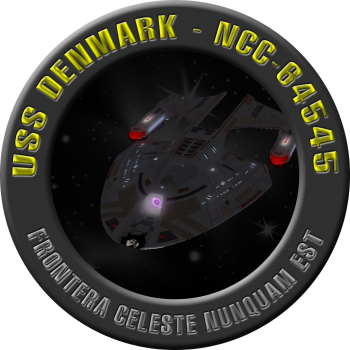 A veteran of the second Borg invasion at the Battle of Sector 001, and of the Sixth Fleet during the Dominion War, the USS Denmark now patrols the edges of Borg Space in the Delta Quadrant.

She is currently under the command of Captain Janis Kerin

Early in 2385 the USS Denmark was involved along with the rest of the then fourth fleet in the red sun rising campaign.

The ship and crew are currently missing in action, their last known location was in the Midgar sector, the USS Sheppard is currently assigned to locating them. The Denmark was located on stardate 101013 however unfortunatly was later destroyed on stardate 101106 in a battle with a Nabraithian/Red Sun Rising mercenary task force.