Elysium is a conception of the afterlife that evolved over time and was maintained by certain Greek religious and philosophical sects and cults. Initially separate from the realm of Hades, admission was initially reserved for mortals related to the gods and other heroes. Later, it expanded to include those chosen by the gods, the righteous, and the heroic, where they would remain after death, to live a blessed and happy life, and indulging in whatever employment they had enjoyed in life.

The Vesta Class starship was the test-bed for a number of new Starfleet technologies, including quantum slipstream drive which could allow the vessel to travel 65,000 light years in just three months. Systems installed as part of the slipstream drive included a quantum field focus controller at the front of the ship's main deflector and a chroniton integrator. The quantum field focus controller allowed the starship to keep shields and communication online and at 100% during slipstream travel. It could also be used as a beam intensifier. If the ship is heavily damaged and the field focuser is still online, power from the phasers and shields could be rerouted to the main deflection system and be used to ether create a shield bubble or a high intensity phaser beam which could be sustained for as long as power can be routed to the deflector array. The chroniton integrator could be used to take sensor readings several seconds into the future when the ship was using its slipstream drive.

The Vesta Class ships also played a major part in the Borg invasion of 2381, however, because of the class's use of several experimental technologies, much of the classes history is currently classified. 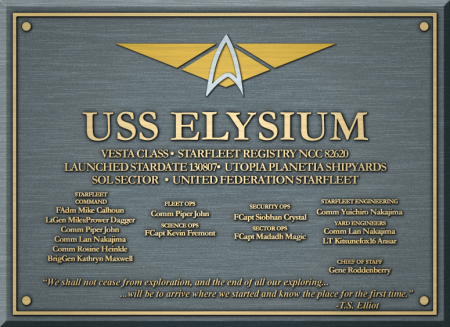 Missions of the USS Elysium