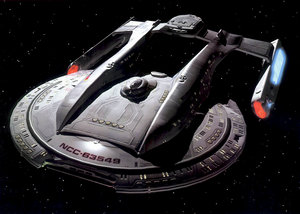 The USS Exitium was launched from Cascadia Shipyards in 2384 under the command of Captain Harry Bailey. In late 2384 she was assigned to Starfleet's First Fleet.

On stardate 100816 whilst doing a routine surveying mission around grid 008, the USS Exitium was given orders fro Starfleet Command and dispatched to follow the vessel of the mysterious snakeman. Thus far no confrontation has been had and all updates are being routed through Fleet Command and to the Shogun as well in anticipation of their upcoming briefing.

On stardate 100924 the ship was destroyed via self destruct by the USS Shogun after being found adrift with all hands presumed lost. It had been overcome by an attack by the Saurali.