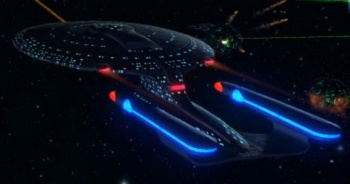 In early 2378, the USS Freedom was one of five Galaxy class starships stationed near the Sol System that were dispatched by Admiral Owen Paris to a defensive point near an opening Borg transwarp aperture near Earth.

The Freedom opened fire on the emerging Borg sphere, and assisted in its destruction. Following the emergence of USS Voyager from the debris, the Freedom assisted in escorting Voyager back to Earth.

The Ship was destroyed in the Midgar sector of the Delta Quadrant in 2386; the USS Menelaus was only able to retrieve all 300 of her civilian passangers, the other 900 souls were seemingly lost with the ship.