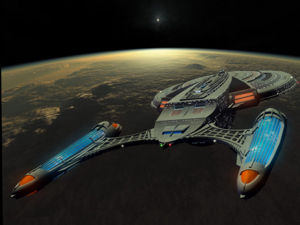 Name: In the myth of Alcyone, Halcyon Days are the seven days in winter when storms never occur.

Constructed at Copernicus Shipyards in 2380 under the Yoyodyne Division.

The USS Halcyon was deployed with the second convoy of ships to the Delta Quadrant, where it was used to ferry colonists. The Halcyon served as a border patrol vessel for several years until 2383, when on Stardate 081231, she was assigned to the Excalibur Colony where she served to protect the colony there. In May 2387, the Halcyon was put into dock at SS Excalibur for a general systems overhaul after engaging a Hirogen Fleet, however, due to the strains on mining and resources in the area, repairs and upgrades were put on hold and the crew was reassigned, while the Halcyon sat in drydock. After the Battle of Excalibur, the USS Halcyon was transferred over to the command of the USS Cochrane Crew and was made space worthy again with the functional systems from the irreparably damaged Cochrane. The ship was rechristened USS Cochrane, NCC 59318-A in honor of the Oberth Class Starship that served dutifully in it's 35 year lifespan.