Hyperion, is a moon of Saturn discovered by William Cranch Bond, George Phillips Bond and William Lassell in 1848. It is distinguished by its irregular shape, its chaotic rotation, and its unexplained sponge-like appearance. It was the first non-round moon to be discovered. The moon is named after Hyperion, the Titan god of watchfulness and observation – the elder brother of Cronus, the Greek equivalent of Saturn – in Greek Mythology.

The Luna Class Starship is Starfleet's newest-generation long-range explorer type vessel, a starship not specifically built for combat, but like the Constitution Class of the previous century, it is a vessel designed for long-term, multi-purpose missions into uncharted space. Equipped with conventional tactical systems (deflector shields; phasers; quantum torpedoes, etc.), the Luna Class ship also boasts state-of-the-art propulsion and cutting-edge scientific equipment, as well as being a test bed for experimental science and sensor technology not yet available on other classes of starships.

Luna Class Starships have the capability of being manned by the most varied multi-species crews in Starfleet history, with Humans potentially taking up less than 15% of the assigned 350 member crews. The crew diversity will help allow exploration in ways that beings of different cultures, biologies, psychologies, and physical appearances can accomplish by learning how to work together, or fail to, depending on the circumstances they encounter.

From stem to stern, the Luna Class Starship is one of the most advanced starships in Starfleet. It is equipped with some of the most advanced features available in the Federation to Starfleet ships. The class employees a new, interchangeable sensor pod. Potentially, this pod could also be replaced with a weapons pod in similar fashion to the old Reliant Class Starship, depending on mission requirements. At 450 meters long, the Luna Class is built sleek and long. As the next generation to the Intrepid Class Starship, it will focus on exploration and scientific research projects, as well as routine defensive duties.

The USS Hyperion is one of the latest starships of the Luna Class constructed at Utopia Planetia Yards. Built with the latest that Starfleet Research and Development has to offer, the Hyperion is a forerunner in Starfleet's ongoing mission of Exploration. Among her features are one of the emerging, yet recently popular propulsion technologies, Quantum Slipstream Drive, an experimental Quantum Sensor Array, and a long range Holographic Transceiver Array, among multiple other advances in Starfleet technology. Along with the Quantum Slipstream Drive, the Hyperion has been equipped with the latest, and newest warp core from the Advanced Propulsion Division, the APD-02 Matter/Antimatter Reactor, a larger, higher output version of their first warp core, ran through it's trials aboard the Intrepid Class, boosting the Hyperion's power output for it's experimental technologies, and acting as a testbed for possible Luna Class refits. The Hyperion has received several Tactical Updates to the Luna Class including the addition of two Type XII Phaser Arrays, and an increase in Torpedo Compliment.

Command of the USS Hyperion was transferred to Commander Lan Nakajima on Stardate 130106 after the inquiry into the destruction of the USS Cochrane cleared he and his crew of any negligence, and even shined a light on the mission in the rescue of 50 Avianis refugees. The Hyperion is currently assigned to the Alpha Quadrant, serving as a leading research and exploration vessel while the majority of the fleet deals with the Hobus Supernova aftermath. 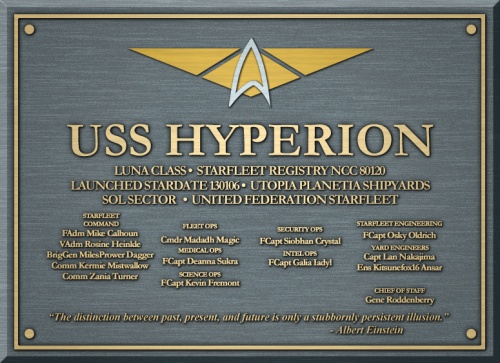