Menelaus: "Menelaus theorem" - a spherical triangle - formed by the intersection of three (3) circle arcs on the surface of a sphere. Useful for the study of navigation, cartography and astronomy.

Greek - 'To Stand with the People'

Starfleet decided to incorporate the separation concept into the new vessel. Many Starfleet ships have had the ability to separate their primary hull from the rest of the ship, but this has historically been an emergency measure intended to allow the engineering hull to be abandoned in the event that a warp core breach is imminent. Reconnection has generally required the services of a starbase or drydock in a process which takes several days.

With the Galaxy class, Starfleet took the separation process a step further. The primary and engineering hulls both had impulse engine systems, allowing them to operate as fully equipped STL spacecraft in their own right. The engineering hull was able to use its warp drive whilst separated, not simply as an emergency measure for a few seconds or minutes but as a viable interstellar drive system. The intent was to allow the primary hull to escape a combat area with the civilians and family members whilst the engineering hull kept the enemy occupied.

However, this concept was never really as successful as Starfleet wanted. The primary hull was essentially stationary by warp drive standards, making it an easy target for an enemy which defeated the engineering hull in battle. What was needed was a ship which could split into multiple sections, each capable of independent warp speed travel. This is the technology Starfleet decided to incorporate into the new Prometheus class.

The warp core arrangement was also unique. The efficiency of a warp core is in part dependent on its height - the longer a core is, the more accurately the matter and antimatter streams can be controlled. Starfleet had initially wanted to equip each section of the Prometheus design with a Defiant-style warp core. This is very compact at only three decks tall, but suffers from inefficiency as a result. It overcomes this by using multiple matter and antimatter streams, so achieving high fuel throughput and so high power output. This gives the core a very high fuel consumption, something considered acceptable for the short range Defiant but not for the Prometheus.

To solve the problem the designers came up with a unique core design for the engineering hull. The warp core has no less than three reaction chambers along its height. During normal operation matter is fed in at the top of the core and antimatter at the bottom, as in any normal warp core. The fuel streams pass directly through the upper and lower reaction chambers and continue down to their meeting point in the central chamber. The core thus operates in a manner similar to any standard model, achieving high efficiency through the long core design.

The central reaction chamber lies on the separation plane, and once the ship splits it is shut down. In the lower engineering section a secondary matter feed just under the central chamber comes into operation, feeding deuterium down to the lower reaction core. This process is mirrored in the upper engineering section, with an antimatter feed sending fuel up to the upper core.

As a result, the combined engineering sections can operate at an efficiency level comparable to any contemporary starship, while the separated sections lose a measure of efficiency because of the shorter warp cores. The primary hull operates on a separate Defiant-style warp core when separated.

The original intent was to have the saucer serve to evacuate civilians as in the Galaxy class, but at warp speed. The idea of carrying civilians was quickly abandoned, however, and the saucer section up-gunned to match the remainder of the vessel. In separated mode the ship is thus able to attack on enemy from three different directions simultaneously, a tactic known as "multi-vector assault mode".

The performance of the Prometheus during this accidental live-fire trial has exceeded all expectations for the ship. The ability to pack firepower little short of a Sovereign class into a ship the size of an Intrepid class offers the prospect of a prodigious increase in Starfleet's potential combat capability.

The USS Menelaus NCC- 59847 is a Prometheus Class Starship launched on Stardate 080628 in 2383 under the command of Captain Bogle Richard. On Stardate 100803 in 2385 the command of the USS Menelaus was transferred to Captain Ezra Sweet. Due to her move to SS Abitus, the captaincy was given on Stardate 120907 to Captain Tedra de Arr ( Tedra Llewellyn ) After several other captains in 2412 the Captaincy was awarded to Captain Tedra Llewellyn

at approximately 1100 Hours on stardate 150808 it is to be noted that the USS Menelaus has been lost with all hands.

Missions for Prometheus class starships may fall into one of the following categories (In Order from Strongest to Weakest):

This Warp core is designed to separate into two independent warp cores during Multi-Vector Assault Mode. The Operational specifications are comparable to the Defiant Class 7 Dilithium Focus Chamber.

Upon reintegration, the core becomes one and is controlled from the Gamma Engineering Section.

During normal ship integration, this core is offline. The Alpha core can be used to run the entire ship but only under low power operating mode

Each sensor automatically tracks and locks onto incoming hostile vessels and reports bearing, aspect, distance, and vulnerability percentage to the tactical station on the main bridge. With 60 independent sensor arrays, backed by the processing power of her computer network, a Prometheus class can not only wage battle, but conduct and lead other Starfleet and Allied vessels in tactical engagements. Further, the Prometheus class can process and collect tactical data at much greater speeds than any starship before her, thanks in part to the redundancy of the arrays, but also the computing power and efficiency of her sensor systems.

(Named after Scottish Loch's on Earth) 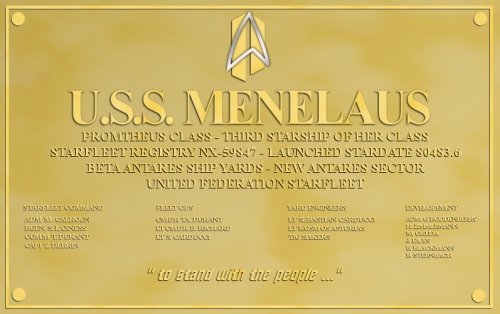 Missions of the USS Menelaus