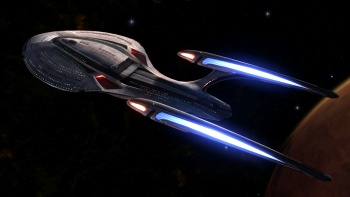 The USS Nautilus was launched in 2372 from the Utopia Planitia Fleetyards on Mars. Under the Command of Captain Phillip Berne, it played a key role in the Dominion War, and was instrumental in the victory at the first battle of Chin'toka in 2374.

After the War, it was placed on border patrol at the edge of Romulan Space. In 2381 it was assigned to the Delta Quadrant with the fleet of United Federation Starfleet under the command of Captain Istani Lenn.

In early 2385 the Nautilus was severely damaged during the Red Sun Rising campaign and was towed to the Cascadia Shipyards for extensive refit.

Following her refit, she was sent on a deep space exploration mission, and was exploring the systems that trail Pinastri.

In May 2386, the USS Nautilus was found destroyed with all hands lost by the USS Shogun. As reported by Captain Ulrich Bechir, the remains and gravesites of the crew of the Nautilus were found on an M-Class planet approximately 219.42 light years from the Pinastri System. It is suspected that a Hirogen hunting party was responsible for the destruction of the vessel and the deaths of the crew.