In 1942, the USS Protector (ARS-14) was an Escape-class rescue and salvage ship commissioned by the U.S. Navy during World War II. Her task was to come to the aid of stricken vessels.

After training and conducting salvage operations off the U.S. West Coast, Protector sailed from Seattle, Washington, for Alaskan waters, arriving 25 June. Attached to the Alaskan Sea Frontier Protector performed salvage and diving operations at various Alaskan stations until April 1945. She then returned to California, whence she sailed for the Marshalls, arriving at Eniwetok Atoll 2 August.

Protector was engaged in salvage of a sunken aircraft off Parry Island until 15 September when she sailed for Yokosuka, arriving 26 September. She conducted salvage operations at Yokosuka until 11 November, then assisted SS Drecel Victory, aground in the vicinity of Fort No.2, Tokyo Bay. On 7 January 1946, Protector departed Yokosuka, sailing via Pearl Harbor to San Francisco as escort and tow for USS Seekonk (AOG-20).

On 24 February 1946 she arrived at San Francisco, California, where she decommissioned 15 May. She was struck from the List of Navy Vessels 8 October 1946, transferred to the Maritime Commission; and sold 30 December 1946 to Mr. Glen R. Butt of Cambridge, Massachusetts. She was later resold, in 1952, to Pakistani interests. Her current fate is unknown.

Merced Class Starships were designed shortly after the Excelsior Class. While not as adaptable and flexible as most Starfleet vessels, it is known as a solid, durable and dependable ship.

The Prototype was built in 2311. During the Cardassian Wars, many Merced-Class frigates were refitted with new warp engines and upgraded weapon systems. In 2384, the class was once again refitted to include Type XII Phaser Arrays, a Dilithium Swirl Warp Core, upgraded Warp Engines along with some changes to the Bridge Module.

The USS Protector, NX-62485 is a Merced Class Starship launched on Stardate 120715 in 2387 from Cascadia Shipyards. It was placed under the command of Commander Benjamin Balan and left SS Tranquility Station on Stardate 120725.

Construction of the USS Protector took place at Cascadia Shipyards. She was assigned to service with United Federation Starfleet 3rd Fleet after crossing through the Khittomer Wormhole. 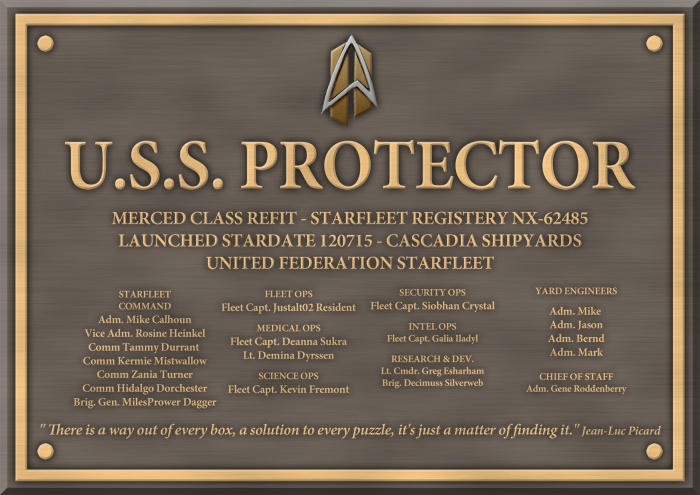 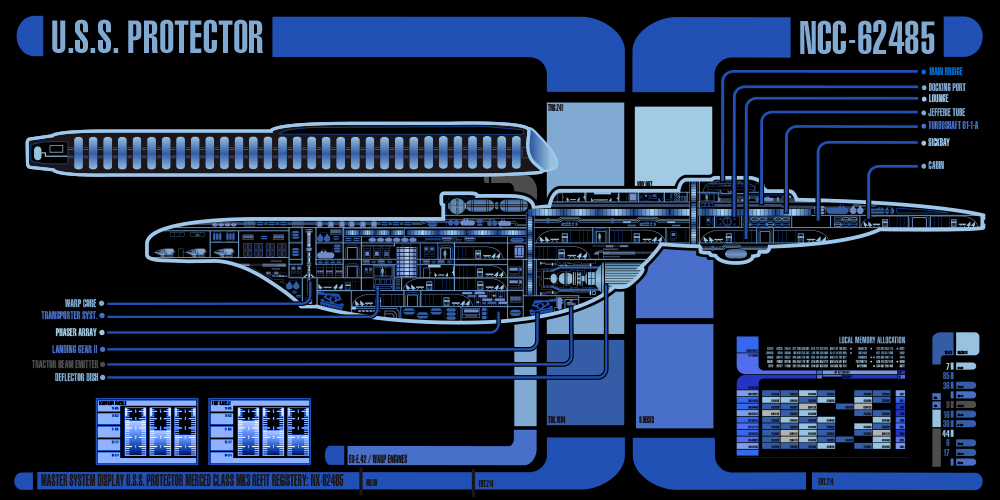 Missions of the USS Protector