The USS Talisman NCC-71934-A is a Galaxy Class Starship launched in 2385 under the command of Commander Jackson T. (Hitman) Jayaram on stardate 100107. The Talisman was initially commisioned in early 2384. The construction process took eight months to complete and make the ship space worthy. During the course of her construction, an espionage attack against Starfleet was enacted upon the Talisman in mid 2384 while still under construction. A member of a pirate organization was inserted aboard the ship as a member of the crew and began to sabotage various systems. The sabotage efforts took the lives of around fifty members of the crew and caused critical damage to the engineering section. The member of the pirate cartel was discovered after two weeks and taken into custody on Pinastri IV.

After her construction was completed in early 2385, the ship's first assiagnment from Starfleet command was to attempt to recover the body of Lieutenant Madadh Magic, the captain of the late USS Aviator. She had been presumed killed during a final confrontation with an Orion attack force above Pinastri IV. Her body was recovered from the wreckage, still alive. She was taken to sickbay and treated by Dr. Genna Thieman with advisment given by Lt. Magic's sister, Lt. Brandi Meredith who serves aboard the Talisman as first officer. Lt. Magic after several weeks made a full recovery.

The Talisman's first mission was a success and she was given her final inspection before being officially launched. The Talisman began its mission of exploration and is responsible for the discovery and charting of several sectors such as Kyrannovos, Unall, and Dactes. The Talisman's first big challange would come in February of 2385 when Dr. David Warfin was discovered having crashed on a planet in the Gildash system. It would later be discovered that Dr. Warfin was a dangerous and wanted criminal from the Alpha Quadrant. He was a brilliant scientist for the Federation before a syndrome known as Einstein Syndrome drove him into madness. He would escape the Talisman by overriding security measures to give him access to a shuttle bay and chemical elements he would drop from the shuttle to scramble the ship's sensors, making it impossible to track him. This would not be the last time the cew of the Talisman would encounter the doctor.

Doctor Warfin would meet his end before he could see his plans unfold. At the end of 2385, the USS Talisman-A would track him into the far reaches of the Delta Quadrant where Warfin had discovered the existence of an entire fleet of Planet Killers. The Planet Killers had been created by an ancient race that had been warring with another. Both races had fought to extinction, and the technology to make use of these devestating devices was lost until Doctor Warfin somehow found it. Warfin was able to ativate one Planet Killer before the crew of the Talisman-A was able to sabotage the equipment used to do so. The crew needed to stop Warfin before he could do any further damage.

The Talisman-A would engage Warfin and his accomplice Cho'Gor, leader of the dishonored Klingon house Korgath, and the Neg'Vhar class ship he had at his disposal. As the two ships battled, the Planet Killer proceeded to destroy the planet to give itself energy to become fully charged. The technology now lost forever, the remaining Planet Killers would remain dorment. The Planet Killer in irony would turn its attention on Warfin's vessel and damage it to the point of sending it adrift. The Talisman would use the damaged Klingon vessel to sling into the maw of the Planet Killer using their tractor beam. The ensuing core breach of the ship was enough to not only deactivate the machine, but shatter its shell. This would not be the last major threat to the Federtion the crew of the USS Talisman-A would stop, however. 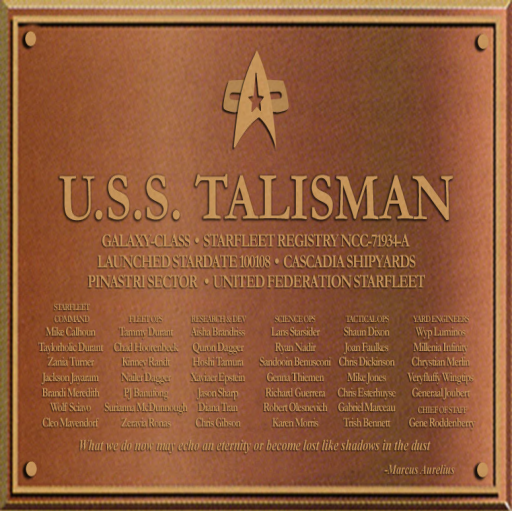 Missions of the USS Talisman-A