The Luna Class Starship is Starfleet's newest generation of long-range explorer, rather than another combat vessel. This class, like the Constitution Class of the 23rd century, is a vessel designed for a long-term multipurpose mission into uncharted space. The Luna is equipped with conventional tactical systems (deflector shields; phasers; quantum torpedoes), some also boast state-of-the-art propulsion and cutting-edge scientific equipment and experimental science technical equipment not yet available on other classes.

The "Luna Class Development Project" was initiated in 2369 in response to the discovery of the Bajoran wormhole. spearheaded by Dr. (Commander) Xin Ra-Havreii, a Starfleet theoretical engineer at Utopia Planitia Shipyard, Starfleet originally conceived the Luna Class as leading a wave of deep-space exploration in the Gamma Quadrant. Field testing the prototype, U.S.S. Luna began in 2372 in the Alpha Quadrant and construction of the fleet was scheduled to begin the following year. Unfortunately, the Dominion War mothballed the project indefinitely, as Starfleet redirected all its resources into the production of combat vessels.

After the war's end in late 2375, the Federation eventually shift back toward its pre-conflict ideals of peaceful exploration and even though the class would no longer be assigned exclusively to the exploration of the Gamma Quadrant, pushed to have the Luna-class revisited as a major step toward resuming Starfleet's peace-time mission. Construction of an initial fleet of twelve Luna-class vessels was completed by 2379.

The USS Taylorholic Durant was commissioned in 2387 as a Cadet Training Ship, assigned to Task Force 2 under the command of Fleet Admiral Mike Calhoun. When he retired from this Captainship, Commodore Poison Toocool was honoured to become Commanding Officer.

The Luna Class vessels appear to have the standard Saucer/Engineering/Nacelle configuration, similar to the Sovereign Class Starship, but with the addition of a dorsal Pod. Some initially jokingly referred to the Luna as "Sovereign Lite". Like most 24th Century starships, the Saucer Section is capable of separating from the Engineering Section. Like the Nebula Class Starship, the Warp Nacelles are positioned below the Saucer & Engineering Sections, connecting to the Engineering section. The Weapons/Sensor Pod Platform projects up & rearward behind the Saucer Section's Bridge, similar to that of the older Miranda and Nebula Class Starships.

The primary construction facility for the Luna Class vessels is Utopia Planitia Fleet Yard, Mars (Sol-4). The USS Taylorholic Durant was constructed at ASDB shipyard in Pinastri, Delta quadrant, the first Luna Class to be built and serving in the Delta Quadrant. 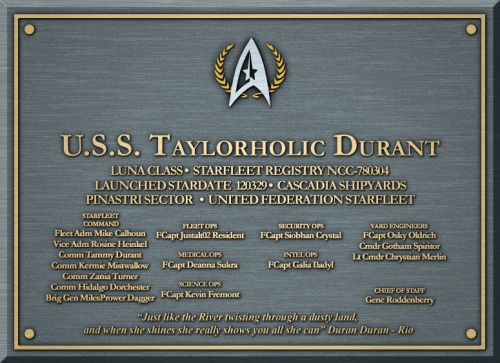 Retrieved from "https://lcars.ufstarfleet.org/index.php?title=ShipsandStations:USS_Taylorholic_Durant&oldid=112278"
Category:
This page was last edited on 17 January 2023, at 09:54.