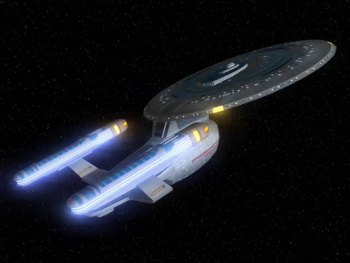 The USS Van Gogh, named after the famous 19th Century Dutch painter, was launched from the San Francisco Fleetyards in 2350.

In 2365 the USS Van Gogh was one of the first ships to arrive at the scene of the decimated Federation fleet at Worf 359, where it rendered assistance to survivors.

During the Borg attack on earth 2373 the USS Van Gogh made up part of Admiral Hayes Armada. The ship was nearly lost during the battle.

In 2381 the Van Gogh was assigned to United Federation Starfleet and the Pinastri Star System.

Currently under the command of Captain Klarel Tigan. As of 110403, the USS Van Gogh is currently delivering settlers to a planet near the Nihyra System